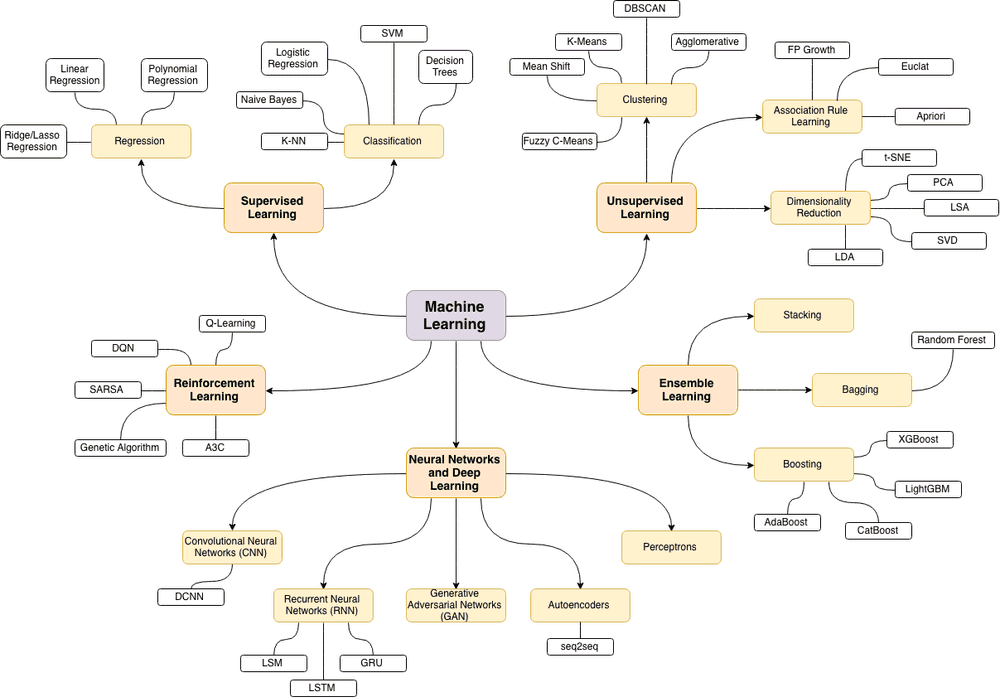 The source of the following machine learning topics map is this wonderful blog post.

I’ve recently launched Homemade Machine Learning repository that contains examples of popular machine learning algorithms and approaches (like linear/logistic regressions, K-Means clustering, neural networks) implemented in Python with mathematics behind them being explained. Each algorithm has interactive Jupyter Notebook demo that allows you to play with training data, algorithms configurations and immediately see the results, charts and predictions right in your browser. In most cases the explanations are based on this great machine learning course by Andrew Ng.

The purpose of the repository was not to implement machine learning algorithms by using 3rd party library “one-liners” but rather to practice implementing these algorithms from scratch and get better understanding of the mathematics behind each algorithm. That’s why all algorithms implementations are called “homemade”.

The main Python libraries that are used there are NumPy and Pandas. These two are used for efficient matrix operations and for loading/parsing CSV datasets. When it comes to Jupyter Notebook demos then such libraries as Matplotlib and Plotly are being used for data visualizations.

Currently, the following topics have been covered:

In regression problems we do real value predictions. Basically we try to draw a line/plane/n-dimensional plane along the training examples.

In classification problems we split input examples by certain characteristic.

In clustering problems we split the training examples by unknown characteristics. The algorithm itself decides what characteristic to use for splitting.

The neural network itself isn’t an algorithm, but rather a framework for many different machine learning algorithms to work together and process complex data inputs.

Anomaly detection (also outlier detection) is the identification of rare items, events or observations which raise suspicions by differing significantly from the majority of the data.

I hope you’ll find the repository useful. Either by playing with demos or by reading the math sections or by simply exploring the source code. Happy coding!