Binary representation of the floating-point numbers

🥸 but yet interactive example of how the floating-point numbers like -27.156 are stored in binary format in a computer's memory 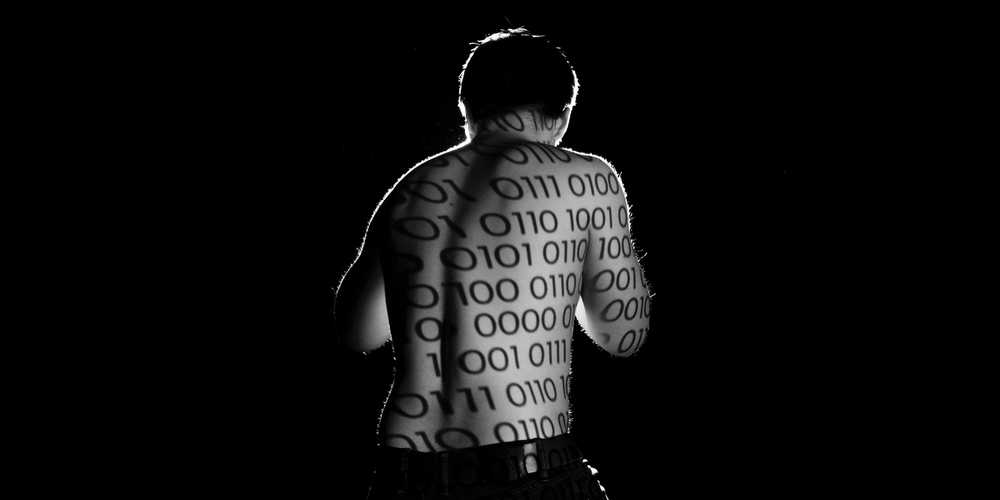 Have you ever wondered how computers store the floating-point numbers like 3.1416 (𝝿) or 9.109 × 10⁻³¹ (the mass of the electron in kg) in the memory which is limited by a finite number of ones and zeroes (aka bits)?

As you might have noticed, this approach won't allow you to represent the numbers like -27.15625 (numbers after the decimal point are just being ignored).

We're not the first ones who have noticed this issue though. Around ≈36 years ago some smart folks overcame this limitation by introducing the IEEE 754 standard for floating-point arithmetic.

The IEEE 754 standard describes the way (the framework) of using those 16 bits (or 32, or 64 bits) to store the numbers of wider range, including the small floating numbers (smaller than 1 and closer to 0).

To get the idea behind the standard we might recall the scientific notation - a way of expressing numbers that are too large or too small (usually would result in a long string of digits) to be conveniently written in decimal form.

As you may see from the image, the number representation might be split into three parts:

The base part we may omit by just agreeing on what it will be equal to. In our case, we'll be using 2 as a base.

Instead of using all 16 bits (or 32 bits, or 64 bits) to store the fraction of the number, we may share the bits and store a sign, exponent, and fraction at the same time. Depending on the number of bits that we're going to use to store the number we end up with the following splits:

With this approach, the number of bits for the fraction has been reduced (i.e. for the 16-bits number it was reduced from 16 bits to 10 bits). It means that the fraction might take a narrower range of values now (losing some precision). However, since we also have an exponent part, it will actually increase the ultimate number range and also allow us to describe the numbers between 0 and 1 (if the exponent is negative).

To make it possible to have a negative exponent, the IEEE 754 standard uses the biased exponent. The idea is simple - subtract the bias from the exponent value to make it negative. For example, if the exponent has 5 bits, it might take the values from the range of [0, 31] (all values are positive here). But if we subtract the value of 15 from it, the range will be [-15, 16]. The number 15 is called bias, and it is being calculated by the following formula:

I've tried to describe the logic behind the converting of floating-point numbers from a binary format back to the decimal format on the image below. Hopefully, it will give you a better understanding of how the IEEE 754 standard works. The 16-bits number is being used here for simplicity, but the same approach works for 32-bits and 64-bits numbers as well. 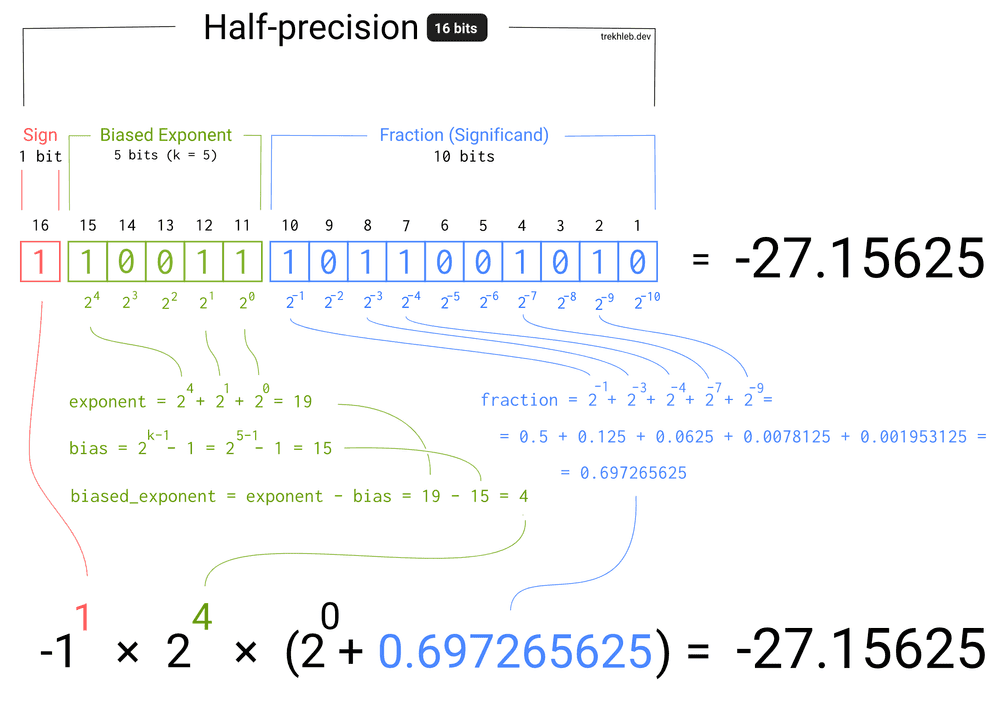 Here is also the interactive tool to give you better intuition of how the conversion works. Feel free to flip some bits and see how it affects the final formula.

Be aware that this is by no means a complete and sufficient overview of the IEEE 754 standard. It is rather a simplified and basic overview. Several corner cases were omitted in the examples above for simplicity of presentation (i.e. -0, -∞, +∞ and NaN (not a number) values)

Here is the number ranges that different floating-point formats support:

In the javascript-algorithms repository, I've added a source code of binary-to-decimal converters that were used in the interactive example above.

Below you may find an example of how to get the binary representation of the floating-point numbers in JavaScript. JavaScript is a pretty high-level language, and the example might be too verbose and not as straightforward as in lower-level languages, but still it is something you may experiment with directly in the browser:

You might also want to check out the following resources to get a deeper understanding of the binary representation of floating-point numbers: